Cine Europa 25, the longest and biggest film festival of the European Union in the Philippines, is going to the Open – Air Auditorium of Rizal Park from 26 September to 4 October.

The film festival is going hybrid this year as it travels to Cebu City, Manila, Iloilo and Palawan.

Cine Europa 25 will have a total of 23 onsite screenings at the Rizal Park . The screenings are held in the afternoon and evening. Admission is FREE on a first-come, first-served basis and the public is encouraged to observe health protocols while watching the films.

The featured opening film at Rizal Park on 26 September at 6pm is “Girl Picture” from Finland. Ambassador Juha Markus Pyykkö will grace the event.

“Girl Picture” tells the story of three girls – Mimmi, Emma and Rönkkö – who are experiencing the “earth moving effects of falling in love”. The coming-of-age film premiered at the 2022 Sundance Film Festival, where it won the Audience Award in the World Dramatic Competition. The film was directed by Alli Haapasalo, from a screenplay by Ilona Ahti and Daniela Hakulinen. 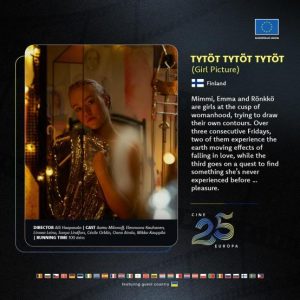 Catch Cine Europa 25 on CineEuropa facebook page to keep updated on the line-up of films at the Park and online, schedule of the film screenings and activities. Please register at http://www.cineeuropaph.com to also view the other films online.

Cine Europa 25 is organized by the EU Delegation to the Philippines, EU Member States’ Embassies, Cultúr Éireann, Irish Film Institute, Goethe-Institut, Instituto Cervantes de Manila and the Philippine- Italian Association, in partnership with the National Parks and Development Committee, the Film Development Council and the Cultural Center of the Philippines, as well as other local and commercial partners.